Alfie, Bella and Stuart have been captured on the local wildlife camera several times, the camera is within a mile from the Coul House Hotel. 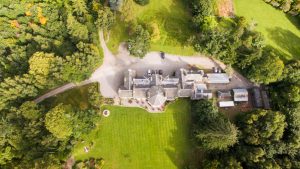 One of the pleasurable things about being an ecologist with SNH is that you come across a lot of interesting and worthwhile projects, some of which I get involved with in my own time.  One that I’m particularly enjoying is the Scottish Wildcat Action project to Save Our Wildcats.

The ‘Highland Tiger’ used to be reasonably common across Scotland, though now is reduced to a handful of small populations. At least, that’s what the research suggests, and which the Scottish Wildcat Action project is examining – with a team of volunteers working alongside the experts, looking for cats in the wild.

I’ve been a volunteer with the project for the last couple of years, and have been running one of the many camera traps set up within the project’s ‘hotspot areas’.  However, I hadn’t seen a cat on my camera trap in all that time – until recently.

I live in Contin, which is in the Strathpeffer hot spot. The land is highly suitable for cats – it’s largely an area of non-intensive agriculture, with pockets of scrub and trees and rough grassland, and cats have been seen locally for many years.

I’d seen a wildcat-like cat walking past my kitchen window one winter’s morning a few years ago, which very swiftly disappeared as soon as I opened the back door.  I’d even found a dead wildcat-like cat freshly killed on a road, but, a live cat, on camera, was proving much more elusive.

I had, however, captured photos of a remarkable amount of other wildlife: pine martens, badgers, deer, the odd buzzard and even mid-flight blackbird – as well as a load of dogs, walkers, and cows.  But, frustratingly, no cats.

Recently, though, the wait had been worth it. On checking one of the two cameras I look after, the bait had gone, and the camera’s photo bank showed a series of images of a cat tearing at the dead quail bait, and then coming back for more.

After a call to Project Officer Nicola Tallach, and a visit from project volunteer Lara, I’m now looking after a cage trap too – baited and ready to catch a real cat – which would then go off to the vets for a health check and DNA analysis.  If the cat’s a feral hybrid we might then neuter it before returning it back in the wild – to prevent it reproducing, and therefore passing on and diluting true wildcat traits into future generations.

Article by Phil Baarda from Contin.

For the full video please go to our Facebook page: